Hot Air Ballooning has been a growing interest for Windrifter pilot David Kramer and his crew chief wife Elaine since their first experience with balloons at the 1985 Adirondack Balloon Festival. They became completely hooked on the sport after joining one of the 400 balloon chase 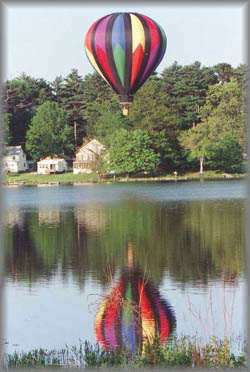 crews at the 1986 Albuquerque Balloon Fiesta. Since David became a pilot in 1993, he and Elaine have flown commercial flights and in many festivals throughout the Northeastern United States, plus Albuquerque, NM and St. Jean, Canada.  Windrifter and crew like to share the joys of hot air ballooning with others, and occasionally enjoy demonstrations and presentations at local schools and charities.  David is an FAA certified commercial pilot and instructor for hot air balloon pilots. He and Windrifter  fly year round. Although most flights are in the southern Saratoga area when they are “at home” in New York, flights can be arranged in other areas, including many portions of Schenectady, Saratoga, Warren,  Albany, and Washington Counties.